From Bachelor’s Degree to Ph.D.: Yiting Li Researches Role of Finances in Relationships Through International Lens

Yiting Li first came to the University of Minnesota for her bachelor’s degree in 2013. She has been here ever since—moving on to pursue a master’s in family social science and now, a Ph.D.

“The U.S. has the top researchers in psychology, which is something I had wanted to learn about since I was just 13,” Yiting said. “Life is too short to limit yourself to just one country, culture, and language. Why not choose another place to expand your life?”

Yiting started her bachelor’s degree program in China at Qingdao University before transferring to UMN.

“My hometown is more like San Francisco weather,” she said. “People always ask ‘Why Minnesota? What’s wrong with you?’”

She credits the academic programs with keeping her here—plus the cold.

Discovering her passion for research

The class discussed intimate relationships and money. At the time, Yiting was in a long-term relationship with a partner in China, and they’d been arguing a lot about money.

During her Intimate Relationships class, Yiting realized the arguments weren’t really about money, but about values.

“I never think about the $1 option because this is how my family raised me,” Yiting said. There isn’t really a right or wrong answer, she said, but learning how to communicate with your partner about financial values is a key to a healthy relationship — even if you don’t agree with each other on every perspective, at least try to learn how to agree to disagree.

“Money and sex are the two most sensitive topics for couples,” Yiting said. “Especially when we’re dating someone at the very beginning, we don’t talk about money because we think of that as a taboo topic. Then people get married and have a partner with tons of debt. If they want to get married, they have to talk about this.”

Especially when we're dating someone at the very beginning, we don't talk about money because we think of that as a taboo topic.

Since then, Yiting has been examining the role of finances in relationships through her own research. Her Ph.D. dissertation compares white and Asian American couples, looking at how parental support regarding finances and financial disagreement between couples impacts relationship satisfaction in marriage.

“For Asian Americans, parental financial support has a significant impact on relationship satisfaction. Not so for white Americans,” Yiting said. “[With Asian parents], they may give you the money but they want to have a voice in your relationship.”

In her master’s thesis, Yiting explored how finances affect the relationship between parents and their children, specifically for Asian American college students and international students from Asia.

She found that international students’ parents had more influence over what major they chose and what kind of job they would get, versus the parents of Asian American students.

Yiting explained that international students need proof of financial support, whether from their parents or other sources, for a student visa to go abroad. If they get that money from their parents, it often comes with a condition.

“They give you enough financial support, so they want something in return,” Yiting said.

Yiting has experienced this firsthand, but she said her students have taught her a lot about unconditional love. She has been a teaching assistant four times for Intimate Relationships, the very same class that introduced her to her line of research.

“They say, ‘My parents love me so much, no matter what I say or what I do. They love me for who I am,’” Yiting said. “That is a huge thing that I cannot imagine. It’s too romantic, too fantasizing.”

Although Yiting said unconditional love is hard to imagine, she’s close to her parents. They spend hours on Skype every day.

“I want to share my world, my perspective with them,” she said. “When I learn new knowledge, new information, a new philosophy, I want to share this with my parents.”

Before the pandemic, her parents would typically visit every year for around two months. Yiting would travel around the U.S. with them, exploring different cities and visiting their friends in the country. She also would show them her life as much as possible, bringing them to yoga class or the boxing gym with her and translating everything for them.

“I want them to see my experience,” Yiting said. “After the first trip, they realized how tough my life might be, so they have been more understanding.”

But it’s still hard for her parents to understand all the stresses that come with being a graduate student in the U.S.

“Before 2020, there was a very thin balance between my personal life and my professional life,” she said. “My family visiting me gave me time to recharge. Since the pandemic hit, my previous coping mechanism is not working anymore.”

Yiting was supposed to graduate in 2020, but issues with the dataset for her dissertation delayed her work for a year and a half. When she finally received the dataset, it didn’t have what she needed to answer her questions.

“I had to reframe every question I had. I had to start over,” Yiting said. “My parents don’t know how much pressure I have because they don’t understand the concept.”

Although Yiting said social science is easier to explain than some other research to a parent who has no background in it, she still had some difficulties explaining her work to her parents. 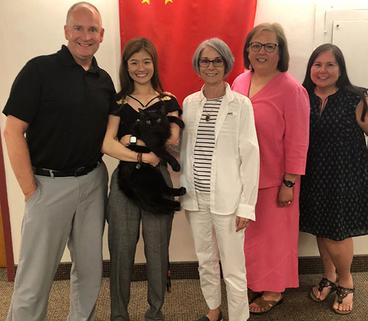 Yiting’s faculty advisers, Tai Mendenhall and Virginia Solis Zuiker, have been her support system while she’s away from her parents.

“They are parent figures to me,” she said. “They are amazing advisers, the best advisers ever. They are the reason that I do not want to leave Minnesota.”

Yiting hopes to find a faculty position in the U.S. — ideally in the University of Minnesota system.

“I want to give back what I have learned from the U and give back to the community,” she said.

As her studies at UMN come to an end, Yiting offers advice for other international students.

“Accept that you are different. Embrace the differences,” she said. “Appreciate this type of opportunity to realize who you are, what kind of person you want to be.”

Yiting also advised that students step out of their comfort zone and learn about a new culture.

“There’s a saying in China that if you are the frog at the bottom of the well, you can only see a small piece of the sky. You have to jump out of the well,” Yiting said. “International students who only hang out with each other, they bring their well to the U.S. They’re still seeing the same part of the sky.”

Getting out of your comfort zone does not mean you are giving up who you are, Yiting said.

“It’s enriching yourself to learn more about the world,” she said, “to accept your differences and to know who you are.” 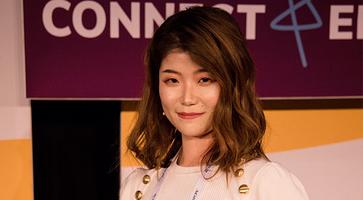 ISSS is a unit of the Global Programs and Strategy Alliance, the central international office for the University of Minnesota system.

© 2022 Regents of the University of Minnesota. All rights reserved.

The University of Minnesota is an equal opportunity educator and employer.